The Corruption of Monetary Motivation

Everywhere I look I see the corruption caused by monetary motivation.

Where there is poverty or low incomes, people will do whatever they can to make a few bucks, whatever the human or social cost. And who can blame them, when their environment fosters survival-of-the-fittest self preservation? In many ways, poverty reflects how society has failed to evolve far from its animal origins.

Where people have comfortable incomes, you will find apathy in abundance. People are so enslaved by the treadmill of ever increasing work and consumption they remain oblivious to the world outside their bubbles — a world of nature, real social interaction, better health, abundant free-time, and the possibility of a better society. Mind destroying TV and pitiful politics keep them entertained in so called comfort.

Where there is wealth, you’re almost certain to find selfish affluence, inefficiency and irresponsible waste.

In business itself, we see corrupt practices such as planned obsolescence and artificial scarcity — behavior that has no place in a rational, civilized society.

The ever growing gap between the super rich and the life-threatened poor only serves to further illustrate the intrepid failings of the capitalist system. The stagnation of the middle class would also be adequate confirmation, were they not all hypnotized by the latest X-Factor.

Yet nothing really compares with the corruptions that span all spectra of wealth. The underlying motivations of everyone and every entity are such that our realities are corrupted by selfishness, inefficiency, and a disrespect for anything but money. 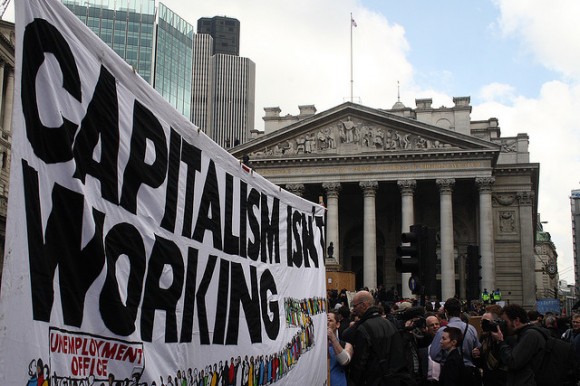 Capitalism has advanced society tremendously — assisting technology (where there is monetary gain), driving progress, and improving the quality of life for most of the west. However, aside from the obvious problems (which I touched on above), over the last decade or two, capitalism has become subject to a catastrophic imbalance that undermines most of its social benefits.

Socialists, arguing (quite justifiably) that equality is better, will never win their argument against capitalists whose very own livelihoods are being scalped by lazy good-for-nothings. Capitalism is, at its essence, a fair system, aligning wealth with effort. At least, that is the idea.

So now we now have a stand off – a passionate war of words between Libertarians, Objectivists, Marxists, Socialists, and everything in between. Yet all these political ideologies are based around money and this primitive system of exchange that we cling to so desperately.

All I see, are too many absolutes. The Future of Money will be complex. There are aspects of every system that have failed, there is nothing to say that any system would fail if certain adjustments were made. We should be more flexible, more open to suggestions that may go against the underlying aspects of our chosen system, but may well improve it beyond recognition. 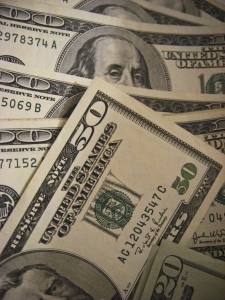 While the political idealists fight amongst themselves, their arguments become irrelevant. All around, we are seeing the growth of systems and societal functions that show complete disregard for this outdated system of exchange based on money. How will technology and our changing society affect this monetary direction? Is it possible to alter its direction, to affect positive change? How would we go about doing this?

Local currencies undermine the often corrupt state controlled monetary systems. They give some control back to the community and can assist in avoiding tax. However, at their essence, they are still systems of exchange and still subject to the underlying faults of this economic model.

Creative commons increases sharing and improves collaboration. It undermines the monetary system because it allows creators and consumers to completely bypass money. This puts more value on creativity – anyone can download some movie making software, but making a movie is now the challenge – it is the end result that has value – even if it is given away.

It might sound idealistic, but communities such as Freecycle create the environment for this philosophy to flourish.

With the abundance that many of us now enjoy, we have little need or even desire for anything in return. Ironically it was consumption focused capitalism that led to this abundance. Now many of us are looking around and just seeing too much junk.

Most significantly, exposure to this system changes people’s expectations and attitudes. As a result there is a growing number of people who are happy to give things away without expecting anything in return. The concept of a free lunch is no longer seen as such an impossibility.

There is a growing trend of people who have taken the too-much-junk philosophy and applied it to their lives. People are realizing that there is more to life than the treadmill of consumption and refocusing their lives to be less about possessions. The growth of this attitude is profound — people are rejecting the system of Work > Buy Crap > Repeat in droves. They buy second hand, and they demand that products last. As this ‘market’ grows, it could have huge implications for the economy.

One implication of the growth of minimalism is the realization that it is relatively simple to survive with just the basic needs. Supplying these basic needs can mostly be done in a self sufficient way, but any other requirements are quite minimal and don’t really require large infrastructure investments. The implications of this realization are that poverty is not necessary, for anyone, anywhere, ever!

Without poverty, many of society’s problems are eliminated.

There is abundance of energy that can be converted into automation, and we would see this if the monetary system wasn’t such an enemy of renewable, free energy. There is abundance of human resources capable of advancing science and technology to help us, if they only didn’t have to work in inefficient, waste-of-time, non value creating jobs that exist just for the purpose of making money. There is abundance of materials if we make efficiency our way of life instead of planned obsolescence and waste.

Since computers became mainstream, we have been introduced to a form of abundance in the form of unlimited duplication. Until advanced nano-fabrication, this is only possible for digital property, but it opens our eyes to the possibility of a post-scarcity future. At the moment, computers demonstrate automated duplication of cheap data. Yet we are already seeing this brought into the physical world with advancing robotics. Material abundance is the only missing link in this chain, and you can expect there to be some progress in this area in the near future.

Abundance reduces value, and although it does not reduce the value of everything to zero, it certainly demonstrates a new way of looking at our monetary priorities and possibilities.

As well as increasing our duplication potential, automation has a significant impact on labor, employment, and value. We can expect a tipping point in the very near future where we are literally forced to rethink the roles of humans in the economy. This is perhaps the most pressing issue in our transition to a new kind of economy.

Power to the People

What all the systems above have in common is that they are bottom-up approaches. They have evolved; grass roots efforts have been enabled by technology and these systems have emerged based around what works. There has been no government intervention, no panel of experts dictating control, and even the corporations have largely failed to have an impact on these emerging mechanisms. Any corporations that have had an effect don’t generally dictate the direction of these systems, they simply profit from assisting them. The companies themselves are forced to adapt — often their business models have to embrace the new way of doing things.

The masses are gaining significance — without needing to resort to the futility of politics and the false feeling of power provided by the vote. In the past, power has belonged to those in control of the monetary system, and those who knew how to use and abuse it. We must be wary as they will not give up their power gracefully and will do everything they can to hinder any transitions away from the current system.

We should also have foresight. The transition and the new systems will offer us incredible opportunities — opportunities for both personal growth and massive social change. Learn about the emerging systems and understand how to take advantage of them. At the same time, recognize the dangers.

The Future of Money will be complex. It will be empowering. It will be disruptive. It will change our lives, and will do so at an accelerating rate.

This essay was written in response to The Future of Money project, which Power Essence fully supports.

Introducing the Future of Money Project