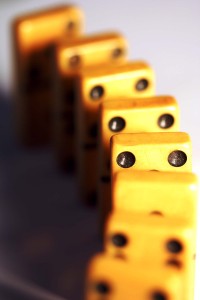 Henry Ford was known to say: “You don’t build a reputation on what you are going to do.”  Again, this business titan reveals his profound genius.

Of course, it’s not just about reputation.  By striving to be more productive, the rewards are personal satisfaction, more exciting days, possibly more income, and much more.  Reputation is simply a side product of a successful life.

We all have dreams.  We all have plans, ideas, goals and aspirations.  The difficult bit is turning them into reality.  But all journeys begin with a single step, and it’s this step that turns out to be one of the most important.  Turning something you want to do into something you are doing is the difference between possible success and certain failure.

Talk is cheap.  Actions speak louder than words, and these words should be your mantra.  Nobody is going to buy something that you plan to do (unless perhaps you’re established at something, but even then you will always be expected to deliver.)  Nobody’s lives are improved by something that you’re thinking of doing.

In becoming a doer, you transform from an observer into someone who is actually living their life.  You will stand above most of the population who are still talking about what they plan to do.

The best way to become a doer is to simply make a start.  Starting a task will break it free from limbo and once in progress you will find it much easier to continue.  Momentum will build and the task will be well underway.  Make that start and you will have taken the hardest step.

Once you begin a project or action, it’s oh so easy to break from it.  Procrastination probably deserves its own article, but for now here are a couple of things you can do to avoid putting things off.

The Danger of To-Do Lists

To-do lists are a double edged sword.  On the one hand, you are organizing your planned actions.  However, you also run the risk of spending more time planning than doing.  Many people find To-Do lists highly productive.  If you use them, just make sure that they are not a distraction from action.  Rather they should be an aid to productivity, something you strive to keep small.

The key is to always be driven to check things off that list!

Fill Your Time with Action!

Be conscious of how you are spending your time.  Remember that the average lifespan is just 900 months.  That’s barely enough time to achieve a truly prosperous life if you don’t fill your days with positive action.  Every minute, every hour, and every day should see productivity.

Learn to manage your time, and be conscious of how productive you are being at all times.

It’s one thing to start projects, it’s quite another to complete them.  And a half finished project isn’t much better than a not-started one.

Completion is a challenge, that much is undoubtable.  But the satisfaction of a completed project or task is one of the best feelings you can have.  As stated, focus on completion without being distracted by the implications of completion.

It might help to plan what you need to do to complete the task, and work your way through these tasks.  Alternatively you may prefer to just power through the tasks in a disorganised way.  Work out which method is the most suitable for your way of working and which fits best with the task.

Ultimately, you should do whatever it takes, because completion is almost as important as starting a task.  Completion turns a collection of actions into a valuable product or service.

So next time you’re about to announce that you’re going to do something, think about how much better that time would be spent if you were actually doing it.  Thinking has its uses, of course. Planning something in your mind is useful for arranging how you’re going to do it.  But this should not be confused with unproductive dreaming.

Think of ideas as computer memory.  While your brain is active, these electrical signals buzz around your head and create a nice image on your mind’s ‘monitor’.  But when your mind is switched off with your death, the information is lost forever.  Turning an idea into a reality is the step that changes a bunch of electrical signals into an immortal concept – a something which lives on beyond us.