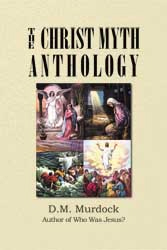 Early Debates on the Existence of Jesus

Even though there’s absolutely no hard evidence for the existence or non-existence of some biblical characters, there is much more evidence for most of it being fictional since plagiarism permeates across the centuries from earlier works. Even the early founding fathers of the USA and other influential people of the time, such as Washington, Jefferson, Franklin, Volney, Dupuis and even Napoleon, debated the existence of Jesus. Enjoy these excerpts from and links to D.M.Murdock/Acharya S.’s well researched article on the myth of Jesus.

Over the decades I have been researching the subject of the origins of Christianity, as well as religion and mythology in general, I have come across many astonishing facts that I have passionately worked to bring to light for the enjoyment of others. Along with this work has been the development of a history for what is called “mythicism,” which in this context specifically refers to the study of various biblical characters, such as Jesus Christ, as mythical and not historical figures.

In this quest to bring forth and help develop mythicism or the “mythicist position,” I have studied numerous primary sources in multiple languages from antiquity, as well as the writings of brilliant visionaries and credentialed authorities of the modern era. One of the juiciest tidbits I have ever uncovered on this quest is the evidence that at least a couple of the American Founding Fathers appear to have entertained the ideas of Jesus mythicism, although this contention seems to have been omitted from the historical record as much as is possible, for obvious reasons, perhaps.

It is a fascinating concept that some of the most famous early Americans may have considered Jesus Christ to have been a myth, but there are intriguing indications that it is true, at least in part or at certain times.

“Washington even was glad to have Volney as his guest at Mount Vernon, and Jefferson occupied his Sundays at Montecello in writing letters to Paine…, in favour of the probabilities that Christ and his twelve apostles were only personifications of the sun and the twelve signs of the zodiac.” ~ Fraser’s Magazine for Town and Country

A number of the Founding Fathers were classically educated and knew much about the ancient Greek and Roman civilizations, and it is claimed that, like Franklin, several others were Deists, rather than orthodox Christians.

It appears that some of these individuals were also sympathetic to the idea of Unitarianism as well, the “nontrinitarian” ideology that denies the Triune nature of God in favor of a divine Unity.