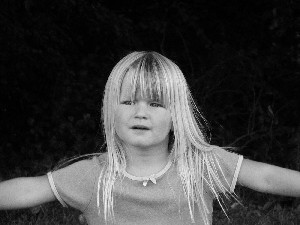 This is the opinion forming and foundational setting period for children.

Although we are born with some personality traits and we acquire more in the first few years of life, we develop more of our personality and opinions of the world and how reality works in this range of age 4 through age 7. It is important to present facts and logic during these psychological forming years. It is also the best time to start praising your child for things well done to help build their self-esteem and confidence.

Fantasy, such as through television, computer games and the Internet, can be a great entertainment tool, but we also recommend that you make the difference known between reality and fantasy, and between objective thinking and subjective modes. Being honest in all respects when dealing with children can inspire them to grow up honest and with a greater respect for you too.

Along with teaching one hundred percent honesty, also teach them about being considerate and positive to others. You can also teach your children about being at least neutral when confronted with negative situations. Being neutral is always better than being upset or angry. Talking with confidence is different than getting loud with aggression. Teach your kids to use logic and diplomacy to settle their differences and disagreements.

This is also the time to inspire them to protect themselves, their siblings, and you too. Saying things similar to: it’s important to protect your family and brother(s) and/or sister(s), and you can be best friends and help each other, can help instill those caring traits at an early age. At the same time, teach the importance of self-preservation through safety.

Stress the importance of being wary of strangers and aware of potential dangers in their immediate vicinity. This can be accomplished without instilling paranoia. There are some very disturbed people in the world, and all efforts should be taken to protect your family. Learn how to spot suspicious behavior of anyone, including people that you know and strangers, but without prejudice or jumping to conclusions and teach these same techniques to your children. By expanding one’s awareness of one’s surroundings, one can increase their level of protection.

Criminals try to target people that are unaware or alone, so recommend that your children stay with groups and always know what’s going on nearby. Make sure they also know that other children can be dangerous, and to watch for danger signs in odd behaviors and what is said. Learn the tactics that child molesters use to lure children into falsely trusting them, and make sure your children know these traps and how to avoid them. Not all strangers are dangerous, in fact only a few are, but it’s important for children to know the danger signs.

You can train any age group the fundamentals of self-defense. Kicking, screaming, and running away to safety are basic techniques. Consider enrolling your pups in martial arts training and even gymnastics to help build coordination and flexibility. Martial arts can also train in personal honor and respect. It is always better to avoid hostile situations, but if your child is trained properly they can think and perform their way out of most situations. By remaining logical and alert, children can figure out a way to escape or attract attention if they are trapped or in danger.

Most sports help to condition a growing body to its full potential. Swimming is one of the best non-impact sports that is also great for cardiovascular strength and endurance. You can even trigger a young body to grow taller than it would without the stretching and kicking of rigorous lap swimming, such as on a swim-team. Knowing how to swim will increase a child’s survival potential and help them the potential of saving other children during a water hazard.

Continue to read to your child on a regular basis. Pick the same night every week and let them stay up late with you. Read to them or work on a craft project together or simply have a chat. If you have two or more children, schedule separate nights up for each. You can even rotate the nights up to keep things fairly balanced and interesting.

Think of ways to give your children the opportunities to learn responsibility and to think rationally for themselves. Simple things such as letting them help you do chores and prepare meals can help build confidence and skills. Let them make certain decisions for themselves and give them a logical explanation as to the pros and cons of certain decisions. Point out all possible dangerous outcomes that you know of and suggest how they can make the best decisions based on the particular situations.

Discuss the basics of sex as early as possible, repeat the basics and then go into detail later. Important issues can always be repeated over the years for added instruction. We are sexual beings and curiosity about gender differences and anatomy can start at a very early age. It is better to have the foreknowledge and logic early than to discover it by oneself or haphazardly from other children.

Sexual activity cannot be suppressed but it is possible to impress your children with a sense of responsibility and maturity regarding sexual issues. Then, they will at least treat sex with respect and know that intimate, relationships and starting a family are best accomplished when more knowledge and experience are gained.

If given a solid grounding of knowledge, young people can make intelligent decisions based on objective thinking and facts.

Evidence indicates that young children can pick up second or even multiple languages easier than adults. Not only teach them common languages, but also find ways of exposing them to complex languages such as Japanese, Russian, or any other language to help push their knowledge-absorbing brains to their full potential. As soon as they can write, then carry that multi-language skill into that particular ability to communicate. Of course, it helps to have people around that speak and write the secondary languages, and who can help teach your children. If none are available, then consider audio programs where you all can join in and learn. Make it into an enjoyable game to increase the child’s desire and attention.

For the younger children, expand on the complexity of the bedtime stories. Present topics such as notable people in history, especially the creative designers, artists, medical pioneers, and any type of explorer. For the older children, turn the story-time into discussion time of your child’s vision of their future, or with current issues. If you know of any, use references to famous people to correlate what your child is going through and what they are interested in pursing.

Always use positive reinforcement, even if you are disciplining your child. Positive methods help teach logical behaviors. Negative discipline invokes irrational and even damaging behaviors.

What would you do? is a question that inspires contemplation and integration of what is known in order to come up with valid solutions. Ask it often; even after your child asks for your opinion or help.

To help increase your child’s safety, have an occasional fire drill or environmental hazard drill to give them that extra edge in dangerous situations. By holding these types of drills, it will also help to increase confidence and teach them to think fast during stressful and life-threatening situations. Make sure to have an evacuation plan in place to ensure safe exits from your home. Continue these drills every so often and throughout the years.