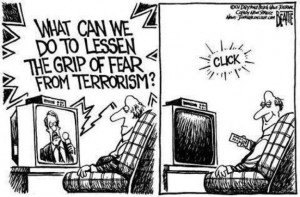 If you work in national security, you have my condolences. For to live a life of constant paranoia, to engulf yourself in fear, is truly a sorry existence.

What a sad state of affairs we find ourselves in, a world where terrorism is all around us.

Our governments seem obsessed with scaring us, telling us that our neighbour who is buying pool supplies is probably going to blow up a hospital full of orphans , and that it is your obligation as a good citizen of this fine country to report them to the relevant authorities. They want us to be self appointed guardians of an increasingly paranoid society, slave drones to an obsessive compulsive king.

Some of us are old enough to remember when it wasn’t like this, and we look back fondly on a time of innocence, when one could board a plane without being molested, when meeting a police officer didn’t involve being psychologically abused or shot. Sometimes we wonder if we might be better off taking our chances with the terrorists. But we know a world without fear is possible.

It helps to put things in perspective. In the “western world”, there have been so few terrorists attacks in the past 10 years that we could count them on one hand, but still we have declared a “war” on it and turned our society upside down in its name. Yet we allow thousands of car accidents to kill people every day, so why do the authorities not hound the car companies to make their cars safer? Where is the “war” on irresponsible corporations?

Of course, attacking corporations is bad for the economy. Attacking individuals and their civil rights is much easier, and allows authority to acquire more power.

Only if we all refuse to buy into this fear can we stop this never ending cycle of paranoia and eroding liberties. We have to stop listening to it. Ridicule those who spread fear. Focus on other things. Jump on every attempt to restrict freedom under the guise of “making us safer”. Live your life.

Turn off the TV.

Or as Steve Hughes says:  “The war on terror. When’s this going to end? When we’ve got the terror?”