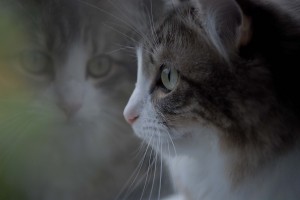 The need for this argument has always been a source of bewilderment for me. People behave differently depending almost entirely on their environment. This is so obvious if you just look for it.

If you woke up and everyone was shooting each other, and you had a gun, you would probably shoot people just to defend yourself. If someone shot your family, you’d almost certainly be filled with hate.

Now imagine if you woke up and everyone was being friendly to each other. Would you grab your gun and go around shooting people? Of course not.

Most people have been on a city train. Much of the time, nobody will be talking to anyone, they’ll go out of their way to ignore everyone around them. This is of course because they are surrounded by strangers.

Now imagine you’re on a course, say, for work. You are in a waiting room with all the other people who are doing the course – strangers. Yet you know you have to spend 2 days with them all. What do you think will happen? That’s right, most people will start talking to each other. It’s quite unlikely that one of them will pull out a knife and start waving it around.

These are just examples. This evidence of how our environment shapes our behaviour is all around us, every day, in everything we do. Now here’s the crux – we can shape this environment.

Alternatively, you can stand aside and let someone else on before you. Give up your seat. The recipient of this good deed might even be surprised. What is for sure, though, is that they will be less aggressive about getting on the train. They’ll likely pass on this good deed to someone else. Positivity escalates.

Really, there is no difference between positivity or negativity. Kindness spreads just as easily as hatred. Good or bad – what you put out into the world is reflected.

Of course, the extent of this reflection depends largely on the size of the community you inhabit. The more people, the harder it is to make an impact. However, that’s not to say things won’t change because of what you do. Never underestimate your own power or the impact a simple action can have.

“Be the change you want to see in the world.” … Mahatma Gandhi

You’ll be amazed how quickly people’s frowns disappear when you’re happy and smiling. It is impossible to be angry with someone who has just made you laugh.

People’s negative actions will be their shame when you respond with kindness. This is very powerful.

Even if your positivity is still met with further negativity, never stop. Stopping negativity is not always possible. What’s important is how you deal with it. You just have to be happy in yourself that you do what you feel is right. Be mindful of your environment and how it is shaping your behaviour.

I’m not suggesting that the world will turn into one big hippy commune if we all just “Be Excellent to Each Other”. But one thing is for certain: If we all go around being horrible to each other, the world isn’t going to be a very nice place to live.

Be what you want to see.