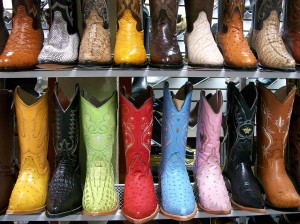 Have you ever been in a shop or other place of business and thought to yourself “Why don’t they do this” or “I could do better”? The likelihood is you have. There is certainly less pride in service and quality than there used to be.

This is where you can take the opportunity to out-compete the company. By doing this you can bring about better service and value to the world, whilst achieving financial independence and incredible job satisfaction. If you’re already thinking how to improve things everywhere you go, then the chances are you will have what it takes to out-compete any company you want.

Now we’re not saying just because they were rude to you in your local supermarket that you should open your own just to get back at them (although we’re not ruling the idea out – if you’re ambitious enough go for it! It may be possible to get the edge by only beating the company in one or a few areas.)

However, there are ways to take advantage of such a situation. You don’t need to out-compete the whole supermarket, just a small part where you think you could beat it. For instance, if you think their produce is bad, you could open up your own greengrocer’s. You don’t always have to beat them completely, being better than them in just one way can often be enough. Always be on the lookout for these kinds of opportunities.

Being competitive is not about being richer or bigger, it’s about being better. Even the smallest entities can out-compete the major corporations in this aspect, and they have. If this were not the case then most small shops would have closed down – but many of them remain open despite supermarkets and large corporations. There is still room for the little guy IF the little guy can offer something the corporations can’t. Imagination is the key. Be critical of everything (but do it silently to avoid giving your ideas away and looking like a moaner!)

Out-competing any business, no matter what the size, is easier than you think. Incompetence is everywhere at the moment, you should have little problem finding an opportunity to take advantage of. The only trouble you will probably have is choosing a venture. You should focus on something you both enjoy and excel at. That way you will have a far greater chance of success.

Remember the ongoing nature of competitive business. They’ll come back with their ideas and you need to be ready. You can’t just out-compete them once, you need to do it continuously. By loving the enterprise you are in you will have an edge that will drive you to constantly improve.

Keep your mind open to new ideas all the time, don’t dismiss anything. This is how the portable music player was conceived. Some bright spark actually thought of removing certain features from a product – namely the speakers – and the rest is history. Don’t be afraid to be different.

In fact, it’s not always necessary to be totally different. Most businesses are just reworked versions of products and services that already exist. Think about a current product or service and how you could run it differently.

Once you’ve thought of an idea, you should be able to create it with your own spin, offering a business that is totally different from any other.